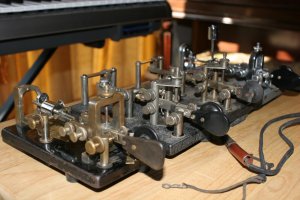 The collection so far(4).

1933 Vibroplex Lightning Bug. This was owned by a Major in the Canadian army during WWII. 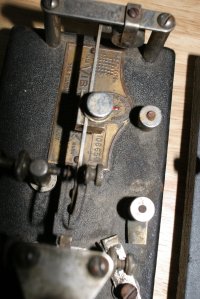 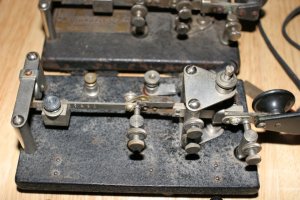 A nice find on ebay, this Lionel J 36 is missing the plate but one can still see the 5 pins on the left side of the base as well as notice the orange signal corps stamping on the bottom.

My favorite of all, the “Martin Junior” Vibroplex original, circa 1920.

The paddels are still intact, unlike the unfortunate Lightning Bug I received – the triangle thumb paddle broke off during shippment.
The only thing that bugs me(pun intended) is that with the older model bugs the paddles tend to give off a not-so-nice oldfactory smell which kinda makes me feel sick. I ordered new triangle paddles, knobs, and switch knobs to replace the aging and fragile ones which will then be stored in a safe place as they are the original pieces. The only things not original on the Martin Junior is the weight and arm dampaner with damper wheel but I still wonder what messges these humble bugs have sent over the years, the news they brought, the places they’ve been, the people they served, and the people who operated them.

Yes, I’ve been bitten by the bug. Watch out, you maybe next. I’m going to enjoy restoring, preserving and using these bugs. 73 for now.

One thought on “Bitten by the Bug”