Finally finished cleaning a few bugs this weekend, the 1933 Lightning and Lionel J 36. Here’s the 1933 base, parts(brasso’d), and final re-assembly: 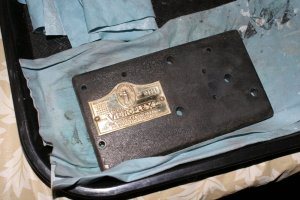 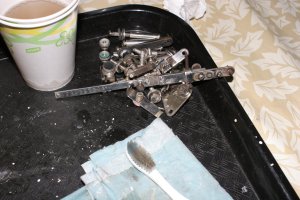 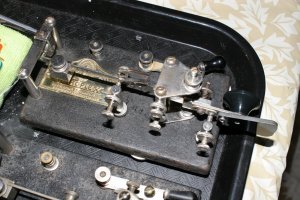 I just used Brasso, soap & water in a cup, defunct
toothbrush, few rags and some elbow grease to get it almost completely clean. Unfortunately the previous owner decided it was better to glue strips of rubber on the bottom so when it came time to improvise round rubber feat I had some trouble. That is with the glue left behind, real sticky stuff. I managed to work most of it off but some still remains – I had faced a dilemma: either use harsh chemicals to remove the glue crud and damage the paint underneath or use the brush, water and soap. I opted for the soap and water – it worked ok and I still have the paint(whats left of it) on the bottom of the base. For replacement feat I used white rubber ones found in the Home Depot furniture section(or thereabouts). They’re a little oversized but work and give the bug a much better footing on the table. A side note: when using Brasso, avoid the RED PAINTED bug emblem on the Vibroplex name plate! I ended up Brasso’ing that part too much and pretty much lost most of the red paint on the little bugger.

The Lionel cleaned up much better, especially the base. Take a look at the “before and after” pictures below: 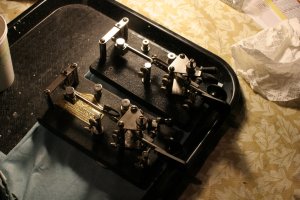